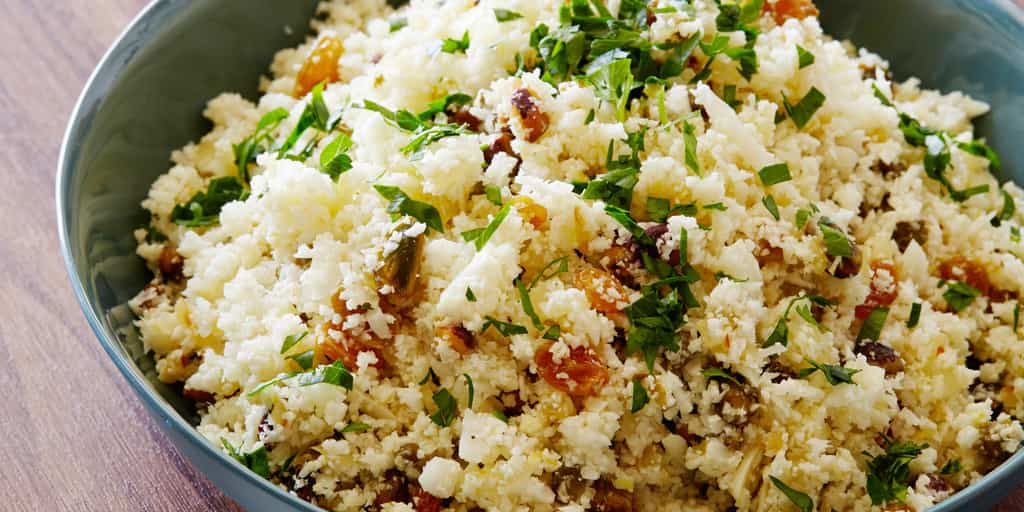 I love the notion of using vegetables as a substitute for grains for those people with grain sensitivities or following a Paleo diet! Also, I am always exploring creative ways to sneak in the extra veggies in my diet and even a surprisingly kid-friendly substitute. When the cauliflower rice frenzy began, I was on board!

Cauliflower is a sulfur-rich food which is why it has that pungent aroma and bitter flavor when cooked. It is part of the cruciferous (brassica genus) plant family which includes some of the following: broccoli, brussels sprouts, cabbage, kale, rutabaga, watercress, turnips, collard greens, among others. Cruciferous vegetables are high in micronutrients such as vitamins, minerals and a compound known as glucosinolates. Studies have shown that when chewed and digested the glucosinolates breakdown to form compounds such as indole-3-carbinol and sulforaphane. These compounds have been sought for their possible anticancer effects such as breast, uterine, prostate, colorectal and lung cancers.

Cauliflower and the cruciferous plant family are rich in several carotenoids (beta-carotene, lutein, zeaxanthin), vitamin C, E, K, folate, and minerals. This food is gluten-free, low-carb, low-calorie and high-fiber but retains its density when cooked. There are many scrumptious ways to prepare cauliflower rice: roast it, boil it or skillet-cook it. The only difference in the preparation is the amount of flavor of the rice from most flavor to mild flavor.

If you are on the run and don’t have the time to make your own cauliflower rice, you can purchase the ready-made cauliflower rice from stores such as Trader Joe’s and just substitute this ingredient from your own.

So yummy and delicious, you’ll want to enjoy this food on a regular basis!

Makes an excellent side dish, snack or meal. For a heartier meal add beans or chicken chunks. Serve hot or cold. Enjoy!