GMO Awareness: What You Need to Know 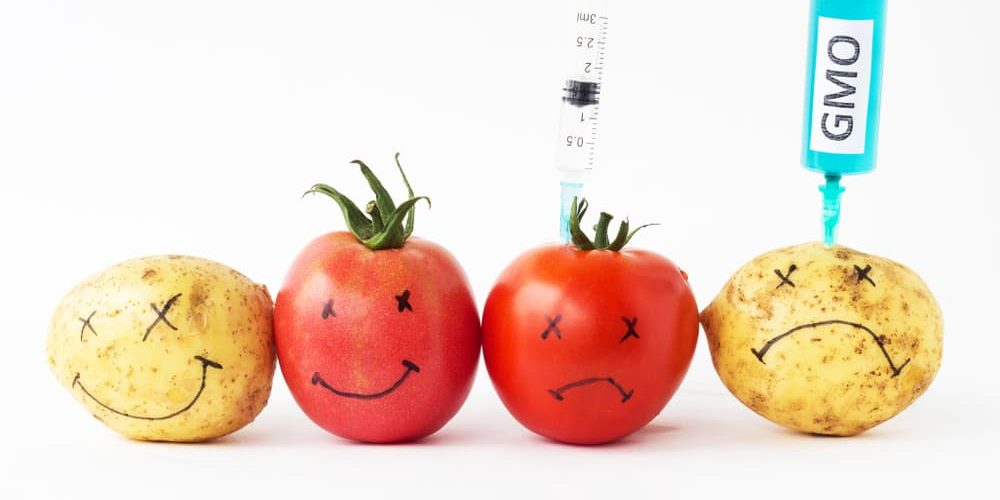 I am guessing that you might not already be aware of this scary fact. It is estimated that as much as 75% of all food products (processed and unprocessed) sold in our grocery stores contain genetically modified (GMO) ingredients. If you would like to eat cleaner and healthier, you would want to continue reading this article to learn more about what GMO is and what it means to the food you put on your dinner table.

GMO stands for “Genetically Modified Organism” and refers to a plant, animal, microorganism or other living organisms whose genetic makeup has been modified in a laboratory using genetic engineering or transgenic technology, in order to favor the expression of a certain or group of desired physiological traits or the production of desired biological products. The result is technically a new organism, but it is not found in nature. It is something created by human scientists. [1]

There are basically three types of GMOs.

2. Roundup Ready – crops that are resistant to the Roundup® herbicide that contains glyphosate.

3. Desired Trait – crops injected with gene(s) from another unrelated species of organisms to favor a certain trait.

As summarized above, Bt is a gene from the soil bacteria Bacillus thuringiensis and is commonly used in the genetic modification of corn, soy or cottonseed to enhance crop yields. The injection of Bt into these crops produces a natural insecticide in these plants which helps keep bugs away. Bt was introduced in the 1990s to combat the corn rootworm pest but since then the pests have developed a resistance to the Bt in corn leading to other issues that are impacting crop yields. Several research studies also show possible health impacts of Bt in crops. [2, 3]

Roundup ready refers to crops that have been genetically modified to withstand the active ingredient in the brand of herbicide – Roundup®. The active ingredient – glyphosate, in Roundup® inhibits an enzyme in the crops that promote amino acid synthesis hence negatively impact the nutritional value and profile in the plant. With roundup ready crops, farmers can spray as much Roundup® as they want (which is currently about 5 billion pounds a year worldwide) without affecting the crops. However, everything else around the plant will die including the bugs, the worms in the soil, weeds, good bacteria. The herbicide gets absorbed into the plant and does not wash off. Now imagine what we might be putting into our bodies when we eat these vegetables that are grown this way. [4]

This last GMO type is a little different in that its end goal is not so much to withstand pesticides but rather have the crop acquire or display more of a particular trait (known as a desired trait) that is deemed desirable especially from a commercial standpoint. The concern with this technology which I call “playing God with our crops”, is that we do not know what for sure if these altered organisms could be waking up genes (such as cancer genes) in our bodies that would otherwise remain dormant for our own good. Cancer has been on the rise yet we are being told that GMO foods are safe to consume.

Why should we care about glyphosate?

As mentioned, glyphosate can negatively impact the nutritional profile of a crop and so can it to our health if we consume it. Made by Monsanto, glyphosates, are the “active ingredient” in Roundup® is the world’s most commonly used herbicide. It is sprayed on everything from your lawn and garden plants to gigantic fields of GMO crops. Research shows that this weed-killing chemical is far from harmless and is an endocrine disruptor that has been linked to serious health impacts.

How are glyphosates affecting your health?

Reports have strongly suggested a rise in many diseases since the use of glyphosates such as [5, 6]:

What do glyphosates do to our digestive system?

Glyphosates strips the plant of all the nutrients it needs to live. However, what it does in our digestive system is even more disturbing. Here are some examples:

1. Destroys our gut bacteria
This is terrible because we need healthy gut bacteria for a healthy immune system. Without it, we become more susceptible to illness, weakness, and disease. Maybe that is why more and more people are supplementing their diet with probiotics.

2. Inhibits our ability to produce tryptophan
Without healthy gut bacteria, our bodies will not be able to produce tryptophan which makes serotonin. As you may know, serotonin is linked to mood. It also regulates the insulin levels in your body to protect you from diabetes. Diabetes is on the rise today in the United States and expending a huge budget on our healthcare.

4. Robs plants of alkaloids
Studies have shown that there is a direct correlation with the increasing use of Roundup (glyphosate) on our crops and the rise in disease in our population. Plants are medicinal because they are naturally high in alkaloids, which absorbs acid out of our body. Our dark greens, kale, broccoli, cruciferous vegetables are super high in alkaloids. Roundup destroys these alkaloids and thus these foods have lost its medicinal properties.

5. Chelates minerals
Glyphosate is a very small molecule and permeates everything. It is a mineral chelator so it is moving certain minerals from places where it needs to be and shuttling it into places where it should not be. When this happens, nutrient deficiency and metal toxicity results.

6. Destroy and mutates human DNA & RNA
Many scientific research studies have been done that indicates that the long term exposure to glyphosate can destroy the cells in our body and alter our DNA composition, potentially causing severe illnesses such as various forms of cancer and organ dysfunction.

7. Cause imbalance in hormones
The long-term consumption of crops containing glyphosates has been found to cause elevations of estrogen levels in our bodies and throwing our network of hormones out of balance. And this can lead to a whole slew of other chronic diseases.

How are GMOs made?

In a nutshell, genetic modification of crops happens when scientists remove one or more genes from the DNA of another organism, such as a bacterium, virus, animal, or plant and “recombine” them into the DNA of the plant they want to alter. By adding these new genes, the plant is likely to express the traits associated with these genes.

Although crop yields have definitely risen with the introduction of GMO some 25 years ago, we have not seen the same improvement in the nutritional profile and density of the same crops. Have we shortchanged ourselves here?

Which countries produce the most GMO crops?

Three GMO crops account for the majority of the millions of acres of agricultural land around the world – corn, soybeans, and cotton. And the five largest producers of these crops produce 90% of the world’s genetically modified crops. They are:

The more research is done on GMOs and the more we learn about the impact it has on our food, the more some countries believe that they have no place in our food supply. In addition to France and Germany, Austria, Hungary, Greece, and Luxembourg have all placed bans on the cultivation and sale of GMOs. Forget the GMOs…that’s where I want to live!!!

The European union’s restrictions on the use of glyphosates in food production are so much more stringent compared to the EPA, USDA or any regulators in the United States. In the U.S. the limit as to how much herbicides the farmers can use is so high that the European Union does not allow US crops to be imported. The U.S. becomes the dumping ground for foods that are too dangerous to be consumed in Europe. Many people are unaware of this policy.

Even though labeling of GMO is required in most countries, the United States and Canada are the only two countries that do not require GMO labeling by law. Despite the fact that 90 % of the American population wants GMO labeling, why is our government not mandating the labeling of GMO? Many people have expressed concern about GMO foods and feel their safety has been jeopardized by the U.S Food and Drug Administration (FDA). How can we leave our health and wellbeing in the hands of biotech companies who have all to gain financially from so-called better crop yields?

The short answer is no. GMO foods are not safe. They have no place on my dinner table and they should not be on yours either.

1. GMOs are unhealthy
Numerous health problems have increased after GMOs were introduced in 1996. The percentage of Americans with three or more chronic illnesses jumped from 7% to 13% in just 9 years. There are more people dealing with food allergies and disorders such as autism, reproductive disorders, digestive problems, and autoimmune diseases.

2. GMOs contaminate―forever
GMOs cross-pollinate, and their seeds can travel. It is impossible to fully clean up this contaminated gene pool leaving a potential threat to the health of future generations.

3. GMOs increase herbicide use
Most GMO crops are engineered to be “herbicide tolerant” so GMO foods contain higher residues of toxic herbicides like Roundup which is linked with sterility, hormone disruption, birth defects, and cancer.

GMOs are one of the most controversial and misunderstood topics in the food world today. Many scary changes are taking place in our food supply and these changes are happening fast. Unfortunately, GMOs is having a bigger and more negative impact than most people realize. You may be one of those people who are suffering from one of the many diseases or symptoms mention in this article. Could it be a result of the quality of the food you are eating?

For more information on cleaner and healthier foods, read my article on GMO Food List to Avoid.

Get started today on a path to better health

If you feeling stuck or unsure of how to get yourself on a healthier diet, let me help you out. Schedule a consultation with me and let’s give your current diet and lifestyle a comprehensive review to find out what’s going on.

In the meantime, how about a detox? Try VegeCleanse Plus™, a 14-day detox program that can help reset your body for better stuff ahead.

Want some clear direction on how to navigate through this GMO maize? CONTACT ME today and together we’ll help you to discover the truths and myths about GMO products and help make your dinner table a safer place to eat.

Check out the most recent articles on health and wellness.

It is my mission to liberate my patients by opening a new path to healing. With compassionate empathy as my underpinning, I am proud to offer genuine healing services to my patients. My patients’ successes are my greatest rewards. It is an honor to empower you with health and vitality.

Prebiotics and Probiotics: Your Gut Buddies!
May 18, 2020